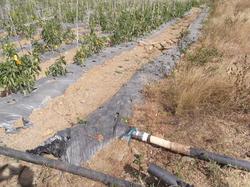 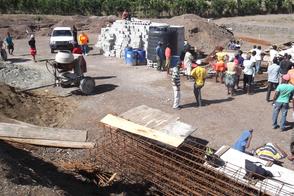 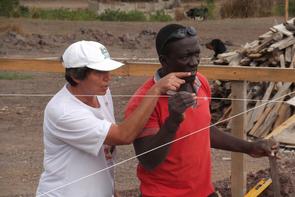 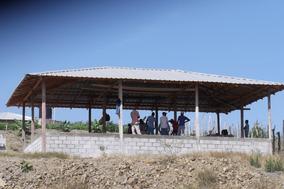 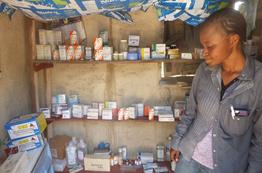 All lagoons will have a 60 mil plastic liner installed to prevent water from seeping into the rocky soil.

​One of six 5 million gallon lagoons.

​A concrete spillway being constructed. 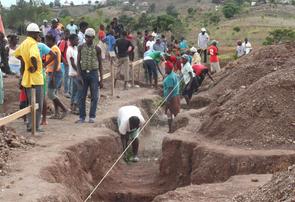 In early 2015, planning began for a four room school in Trioly.  This is one and a half hours north of Los Cacaos, which has been the center of most of her work for the past 6 years.  Tiroly has seen an increase in population from 3000 in 2010 to over 20,000 today.  This increase is due to two of Sister Maria's other projects - the building of roads and clean, disease free water.  Construction of the school begin in November 2015.  Due to additional donor funding, the school will now be three stories with 18 classrooms.  Sister has hired two Haitian's with concrete and carpenter skills to head up this project.  All other labor will be donated by local parents who realize the importance of education for their children.  It is anticipated that up to 60 people daily will be helping with this effort.

​Inside the pharmacy which two Haitian women dispense medicine and drugs to the community as needed. 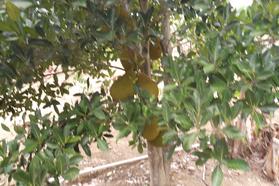 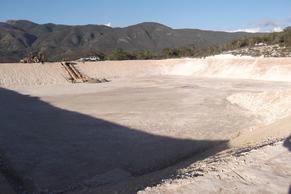 Greenhouse Project in Circa Dillo, D.R.

Circa Dillo is a small community on a dead end road in the mountains above Pedro Santana.  Sister Maria is working with another group of sisters on a three year crop production project.  The goal is to determine which vegetable crops, growing in different environments, are best for this location.  Crops are being grown in a greenhouse, under shades, and also outdoors.  There is also an orchard with many different varieties of fruit trees, including six different varieties of mangos.

​Some of the 60 community members helping build the school in exchange for tuition for children.

Champion for the Poor

​One of the fruit trees in a  one acre orchard. 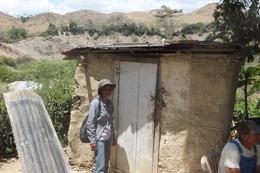 If donations and funding allow, Sister hopes to build six community centers over the next five years in east central Haiti.  These centers would be used for community functions, teaching literacy, health classes, and would double as a health clinic. 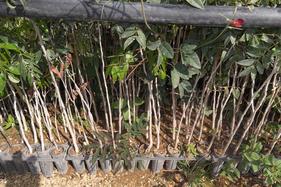 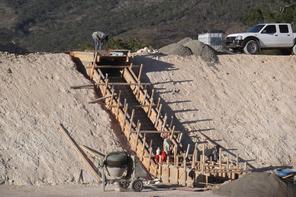 After 20 years, Sister Maria was finally able to convince the Domican Rebulic's government that this was an important project for this area.  The project involved one year of planning and design work by three government agencies.  The construction involves 12 contractors and will be completed in about 12 - 13 months.  It involved capturing spring water and runoff during the rainy season.  This water will be stored in six lagoons, each holding about five million gallons of water.  This system will provide irrigation water during the dry season of the year (October - April).  Currently, the project is providing jobs for 100 local residents during the construction phase.  Once the system is operating, several thousand acres of new, productive land will provide several hundred jobs in and around Vallejuelo.

One of three new buildings at Ag Formation Center. 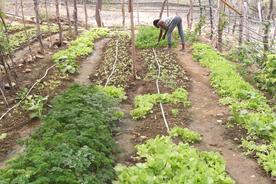 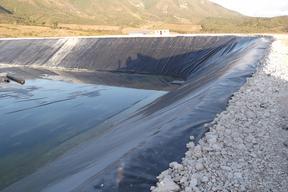 Work has continued on the agricultural formation center in Los Cacaos.  This project includes classrooms, a dormitory that sleeps 10, storage buildings, an area where up to 60,000 trees can be started from seed each year, and a field where vegetable crops are being grown with irrigation.  Sister Maria's staff will teach more effective ways to grow crops.  Sister will transport Haitians from remote areas where they will learn more up to date cropping practices and how to double their yields with Sister's irrigation principles.  The irrigation comes from the mountains by gravity, which is important in this area of Haiti which has no electricity.

​Building materials for the school project.

​Sister Mathilde stands outside the mud hut which serves as a pharmacy in Los Bothaos.

The area of Haiti that Sister Maria works in has no doctors.  This is a remote, mountainous region of east central Haiti.  The city of Thomassique has a population of 40,000, a small clinic, and one nurse, but no doctors.  They receive one or two boxes of medical supplies every few weeks.  The possibility of doctors, dentists and nurses visiting as missionaries from developed countries to this region for one or two weeks at a time would save many lives.

​Lettuce and other vegetables inside the greenhouse.

Trees started from seed 6 months ago.

​An irrigated field of peppers at the Ag Formation Center.